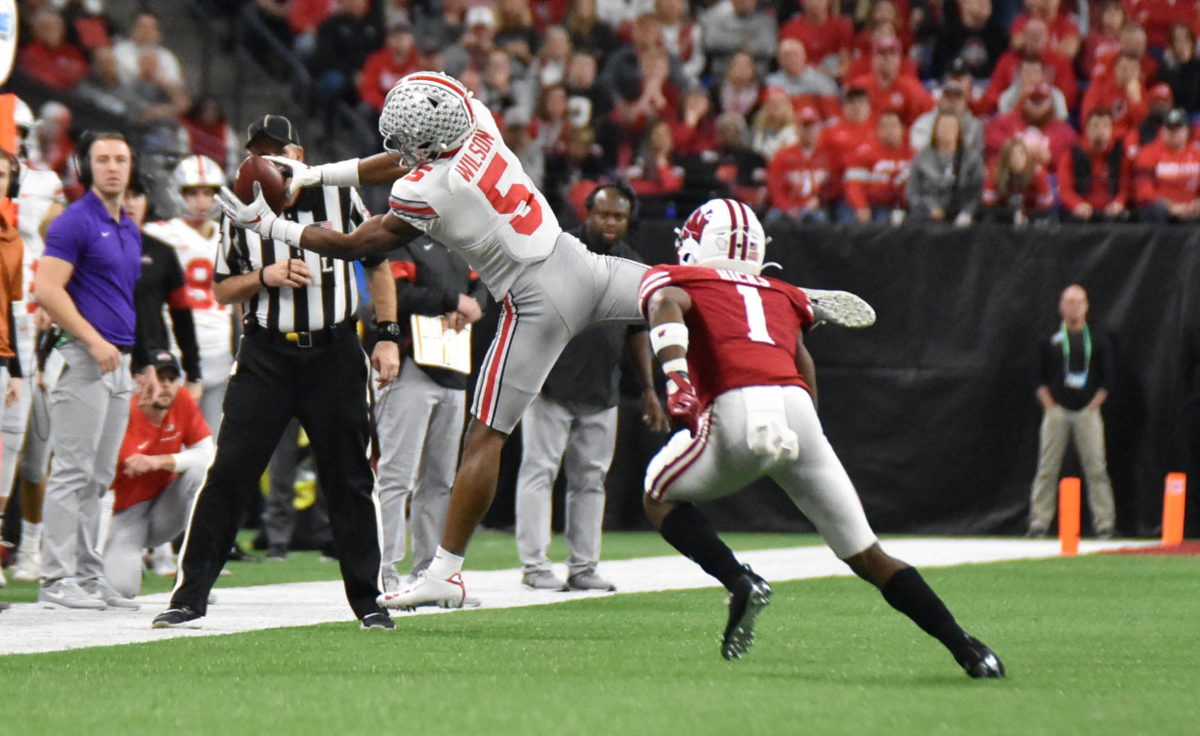 Garrett Wilson was a consistent producer during his three-year stint at Ohio State. Though he did not break out as a 19-year-old freshman, Wilson did manage 30 receptions for 432 yards and 5 TDs in a crowded offense featuring Chris Olave, J.K Dobbins, fellow freshman Jameson Williams, and future seventh-round draft pick K.J. Hill. As a sophomore, Wilson became a featured weapon in the Buckeye offense. He truly broke out with 43 receptions and 723 yards in just eight games giving him an official breakout age of 20.1. As a junior, Wilson finally surpassed Chris Olave, finishing strong with 70 receptions for 1,058 yards and 12 TDs.

In addition to his strong age-adjusted production, Garrett Wilson is beloved by the film community. He is a sudden athlete and a separation expert who is lightning after the catch.

Garrett Wilson showed off blazing speed at the NFL Combine, running an official 4.38 forty-yard dash. He also recorded a 122.7 Burst Score, which ranks in the 58th percentile among WRs.

At 6-0, 184 pounds, size is Garrett Wilson’s biggest “red flag,” and I’m putting red flag in quotes here because I’m not particularly concerned. We’ve seen CeeDee Lamb, Stefon Diggs, and Diontae Johnson provide strong production in the NFL with similar builds. And DeVonta Smith, with an even lower BMI, was a top-ten pick and a productive rookie. In today’s NFL, the ability to separate transcends the need for prototypical size.

Garrett Wilson is a top ten pick! Without even considering the specifics of the landing spot, this is big news for Wilson and his prospective dynasty managers. Essentially, the NFL has confirmed our prior assumptions: Garrett Wilson is very good at football.

Now, let’s take a look at the New York Jets. Outside of Elijah Moore, the depth chart is not very intimidating at WR. Corey Davis and Braxton Berrios will still be involved, but Wilson will start right away. He should be projected for the second-most targets in this offense in 2022.

Of course, the elephant in the room is Zack Wilson. Is he good? Can he support two fantasy-relevant WRs? I don’t know the answer to the first question, but the answer to the second is a definitive yes. Just a couple of seasons ago, Teddy Bridgewater supported three top-24 options at WR. The landing spot certainly isn’t perfect, but it isn’t bad either. Ultimately, what you want for Garrett Wilson are targets, and he’ll be getting a lot of them.

Garrett Wilson is a complete receiver who will command significant snaps and targets from day one. He is capable of playing outside and in the slot, and he’s a homerun threat on any given play. Wilson has the upside to produce multiple WR1 seasons, and, perhaps just as important, his top-ten draft slot and skillset make him an incredibly safe investment.

Wilson deserves consideration as the top receiver in this rookie class, though it is a crowded group at the top. He should be in play as early as the 1.02 in 1QB dynasty leagues and the 1.03 in Superflex.

Thanks for reading this article! Look me up on Twitter at @fantasyfreezer if you’d like to hear more from me. I love answering fantasy questions, discussing trades, and engaging in friendly debates, so be sure to drop in and say hello. #DFFArmy #FantasyFootball #AlwaysBeBuilding #NFL #NFLDraft #NFLTransactions #NFLTrades #AlwaysBeScouting