Fantasy Impact of Tyreek Hill not being Suspended by NFL The NFL announced this morning that they have decided to not suspend Chiefs wide receiver Tyreek Hill, who was accused of assaulting his son. This does not mean he is in the clear, Hill could still be suspended if new evidence were to emerge.

NFL will not discipline Chiefs’ WR Tyreek Hill, who was accused of assaulting his son. League could not find evidence he did; it will leave open case if further evidence emerges, but Hill is free to report to camp, practice and play this season.

Hill will now get to rejoin his teammates. It’s an immediate bump for Hill, who currently has a dynasty ADP of WR15 and a redraft ADP of WR20. Hill, who finished as high as the WR1 in some leagues, is now a screaming value for anyone who drafted before this news breaking. As of now, Hill should easily be able to outperform his dynasty and redraft ADP. Hill’s 2019 upside is as high as any wide receiver in the game, playing on an Andy Reid coached offense led by Patrick Mahomes, one of the best young quarterbacks in the game. Mahomes and Hill’s chemistry was clear last year. If you bought low on Hill, it would appear you will be reaping the rewards. 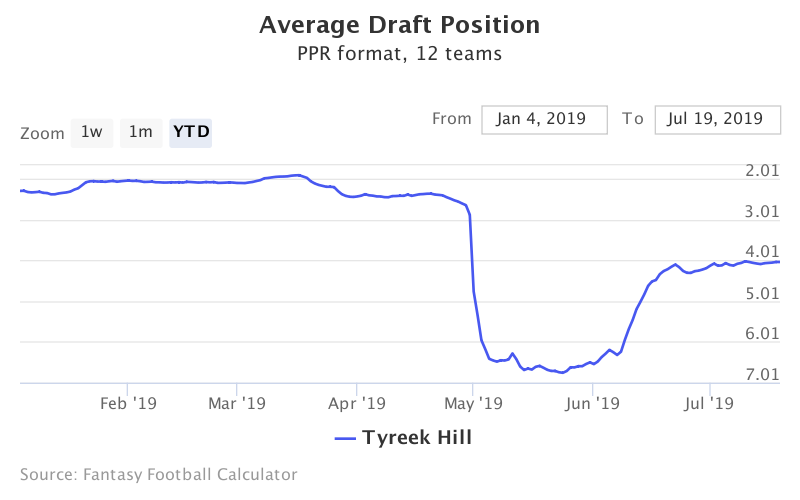 Mahomes is one of the biggest winners of this news. Mahomes, who finished as the QB1 in 2018, will now get his most explosive threat back on the field with him for 2019. Hill is a big part of why Mahomes was able to finish the season with 5,097 yards and 50 touchdowns in 2018. Hill’s deep threat ability opens up the entire field for this offense. Mahomes remains the consensus top quarterback in both dynasty and redraft.

The two biggest losers of the news are Hill’s fellow receivers, Sammy Watkins and Mecole Hardman. Many thought that Hardman was to be Hill’s replacement when the Chiefs took him in the second round of the NFL draft, surprising many people. Hardman rose as high as a mid-first-round dynasty rookie pick. With Hill back, Hardman’s value drops substantially. Sammy Watkins value dips some but as long as he stays healthy he will remain fantasy relevant. Before getting hurt last year, Watkins was the WR24 through the first nine weeks of the season. Both receivers have upside in this offense, but Hill caps both of their ceilings.

Hill returning is a wash to Kelce’s value. Even with Hill playing every game last year Kelce was still able to finish as the TE1. Hill helps keep some of the attention off of Kelce, so the two complement each other well. Kelce is still going to get a healthy amount of targets and is a safe bet to repeat as the TE1 in 2019.

QBs/RBs/TEs To Watch During The Senior Bowl